Following the government’s recent response to its consultation on correcting the age discrimination identified in public sector pension schemes, UNISON has produced a series of frequently asked questions to help members understand what it means for the NHS Pension Scheme. 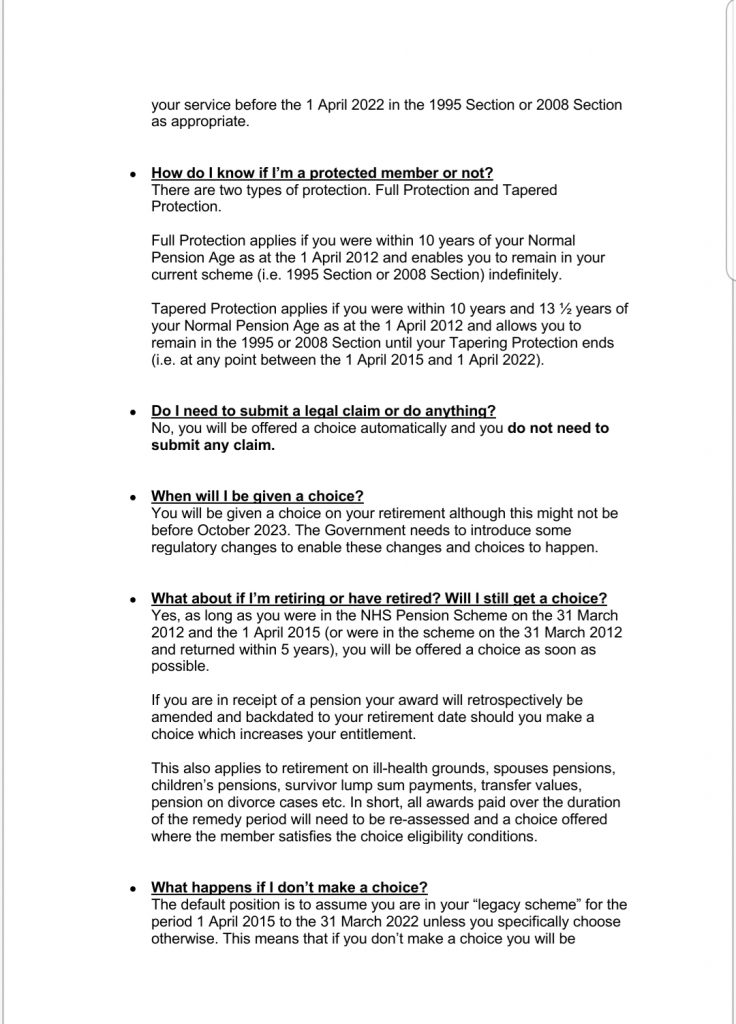 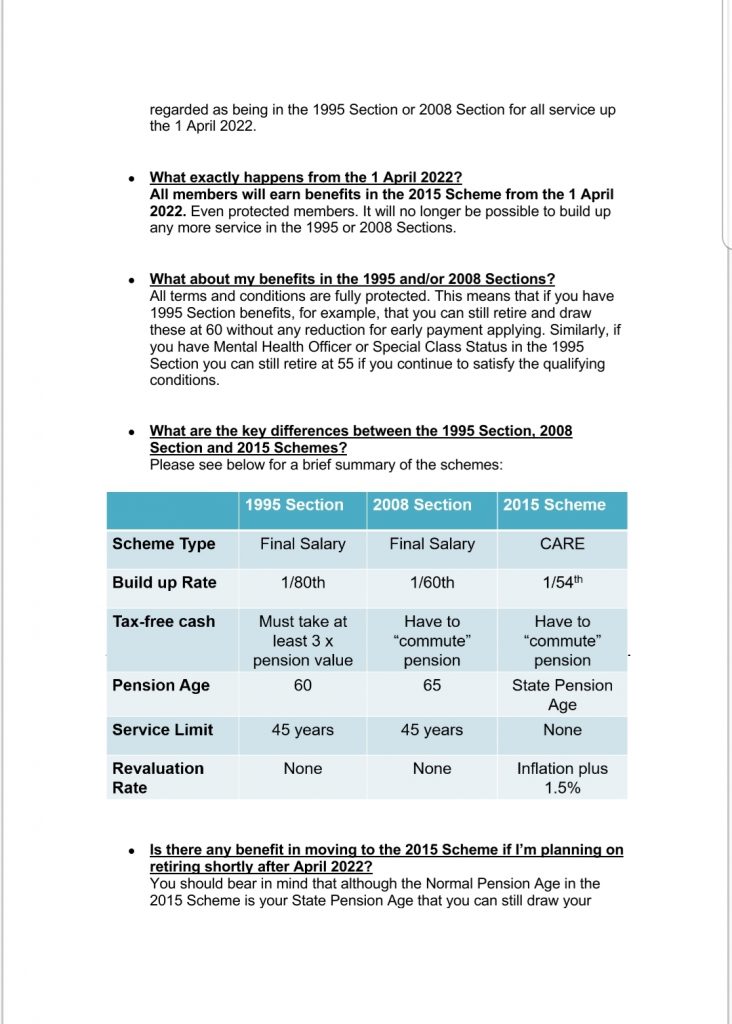 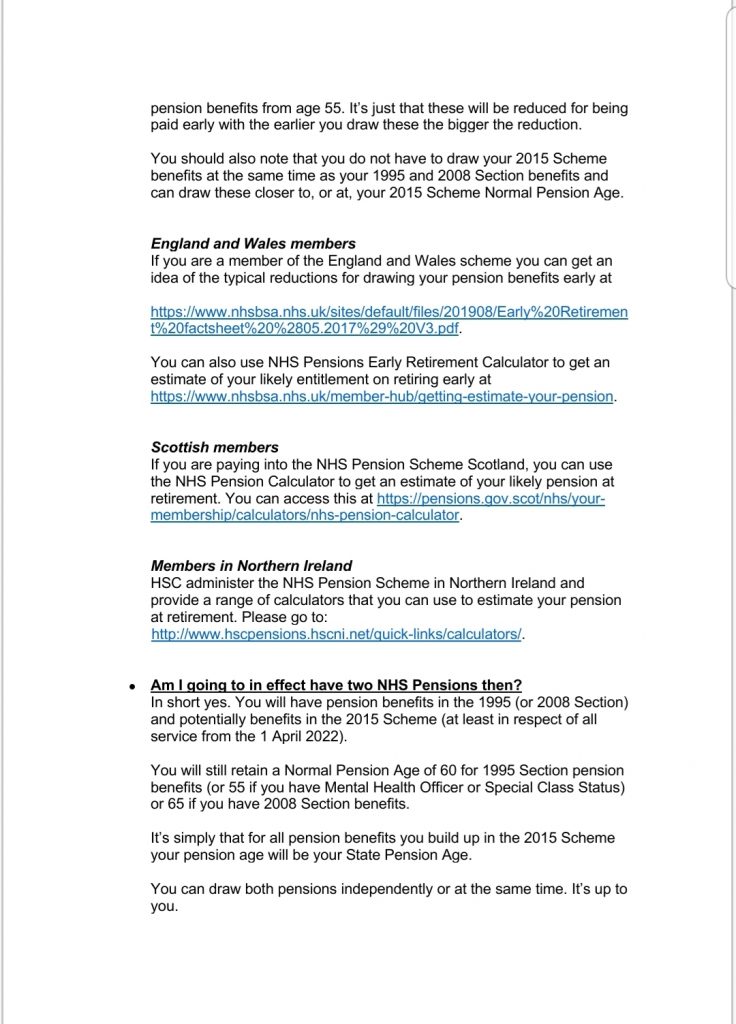 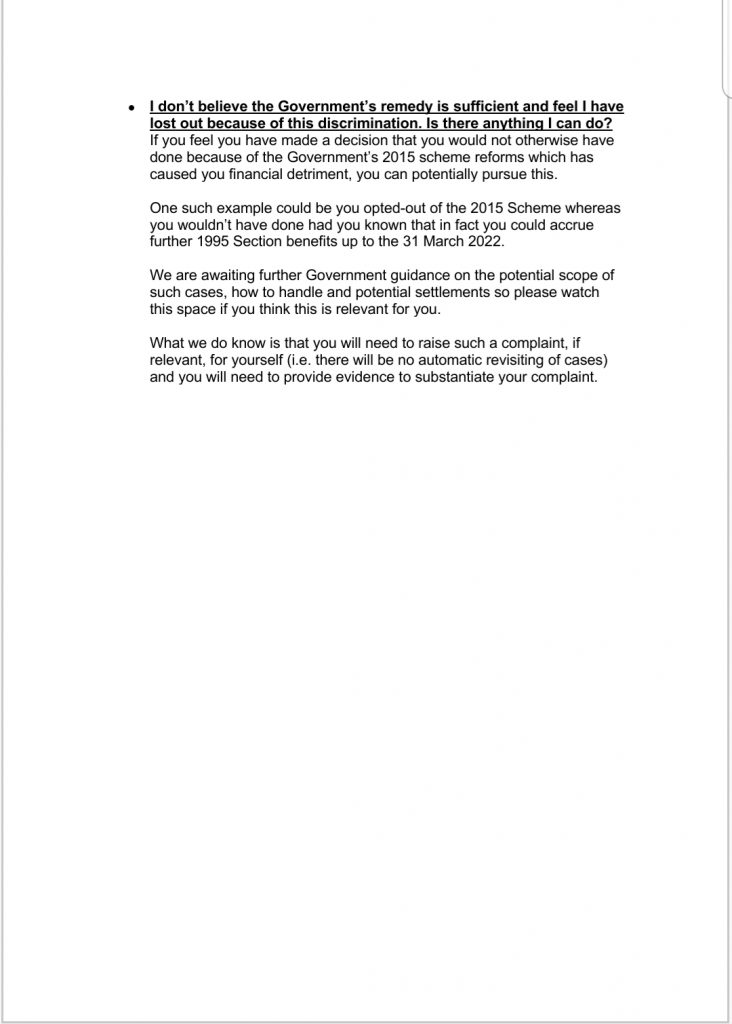 The Scottish Public Pensions Agency (SPPA) has published a new circular<https://www.pensions.gov.scot/nhs/scheme-governance-and-legislation/circulars> which lays out the UK government’s decision on remedying the discrimination in the 2015 reforms to public service pension schemes. This follows a decision by the Court of Appeal. This is usually referred to as the McCloud Judgement. The pdf is attached to this email.

The UK Government introduced reform of a range of public sector pension schemes in 2015. The reforms included protections for those near their retirement age which allowed them to stay in legacy schemes. When challenged the Court of Appeal found these to be discriminatory against younger scheme members in judicial and firefighter pension schemes. The government accepted that the judgement had implications for other schemes. The remedy could not simply be to return everyone to the old schemes as some people would have been worse off under those schemes. Last summer the government consulted<https://www.unison-scotland.org/nhs-pensions-response-uk-treasury-re-mccloud-judgement/> on options and they have now published their decision.

The route forward will be Deferred Choice Underpin: (DCU). At its most basic this means that pension scheme members at retirement will be able to choose which scheme their contributions from 2015 until 2022 are in. From 1 April 2022 everyone who is still working (and contributing to a pension scheme) will be a member of the reformed schemes. The attached SPPA circular outlines the decision and contains a useful FAQ for scheme members.

No action is required by scheme members just now. The SPPA will contact those affected further information will be available on their website<https://www.pensions.gov.scot/nhs/scheme-governance-and-legislation/circulars>. Members will need to take advice on the implications of the choice they have to make when they access the scheme (i.e. retire) as the choice will very much depend on individual’s circumstances.

The Treasury is consulting on proposals to remedy the issues raised by the McCloud judgement. UNISON submitted a UK response and this additional response has detail for Scottish members. Across the UK, UNISON is broadly supportive of the UK Government’s two proposed remedy options.

However, we do believe that Deferred Choice Underpin (DCU) presents the better remedy option for correcting this discrimination. This is on the simple premise that it reduces the likelihood of individuals making the wrong choice. UNISON Scotland therefore proposes DCU as our preferred remedy option.

UNISON Scotland does not support the UK Government’s proposal for the remedy costs to be met by members.

UNISON Scotland is also calling for a review of the Normal Pension Age for certain occupational groups within the 2015 NHS Pension Scheme. This will allow us to see if the evidence base supports a lower Normal Pension Age, such as that currently applied to the “uniformed services”.

Immediate detriment members and dependents must be prioritised in being provided with a choice at the first available opportunity.

Get protection at work and a range of other benefits from just £1.30 a month.

We use cookies on our website to ensure you find the information you need in the simplest way. By continuing to use our website you are consenting to their use. Find out more about cookies and how we use them.